For this post, I want to talk “out loud” about how I select photos and, more importantly, how I reject photos. I realized last night that it’s one of the most difficult and time-intensive things I do (sometimes several hours a night)–much more difficult than developing the film or, often, taking the photographs in the first place.
Here are some photos from a single roll I took in April. The film is Arista Premium 100 (which is re-packaged Kodak Plus-X) from Freestyle Photo, which I developed in Diafine. I shot these all with a Leica MP, mounted with a 28mm Minolta M-Rokkor lens originally designed for the Minolta CLE.
Recently I’ve fallen back into a “practice” mode of sorts because I’m not technically as good as I need to be: I tend to shoot while moving, and so I get too much blur, and I don’t have a good grasp of distance for proper, fast focusing. So on this roll, I was trying to get a lot of shots of people in focus, regardless of whether or not the photo was any good. But you still hope for that one good shot!

I took this on a morning walk with my son and dog. I was attracted by this woman’s look and the fact that she’s framed by this doorway and dirty sidewalk. She’s smoking, which brings an interesting expression to her face and hand. But really that’s all about it for me. My composition was hasty as I wanted to get this before she was done inhaling, and I didn’t want her to feel self-conscious. If I saw this scene again, I would shoot it again, but I would probably place her further right in the frame, and maybe move myself to get her a little more head-on. It’s easy for me to like a photo I’ve taken only because there’s a person (or more) in it. I have to push back against that. People don’t always make interesting subjects, and I’m not often a good photographer. So even if I could reshoot this, I would probably still reject it because I can’t see it becoming that much more interesting unless I got up really close. 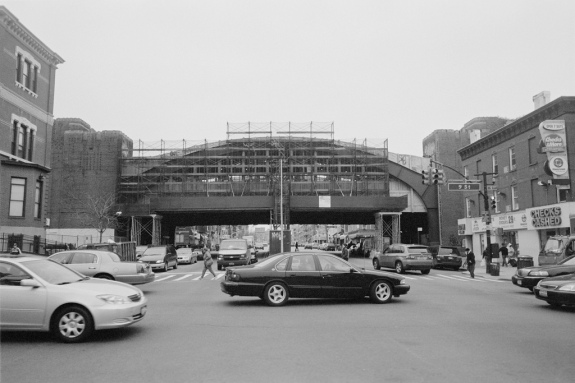 This is what I call a “placeholder” shot. It’s a reminder to myself that I want to go back and shoot this some more, or a reference point for something else. In this case, I’m drawn to this structure, a subway bridge over Fourth Avenue in Brooklyn, because I used to live a few doors up the street from here (enter the photo and take an immediate left). This was our subway station. It was beautiful back in its day, but the deco fixtures have fallen apart and the glorious glass-clad bridge was painted over countless times and served as a billboard support in more recent years. I’m very excited about the renovation, so I took this photo to start the process of keeping track. I won’t do any kind of photo essay project about it (too much other stuff going on) but I’m in the ‘hood often enough to take a few shots now and then.

I was drawn to this scene because there are at least five visible umbrellas sticking out of this garbage can. There had been a thunderstorm the night before–quite a heavy one. I took this photo to document what the morning after looks like. It’s not terribly interesting, though. I’m especially annoyed that the left-most umbrella is so neatly lined up with the crosswalk. I had another take of this that I liked less. On that one the rotation of the frame is slightly more, and the cars are less visible. 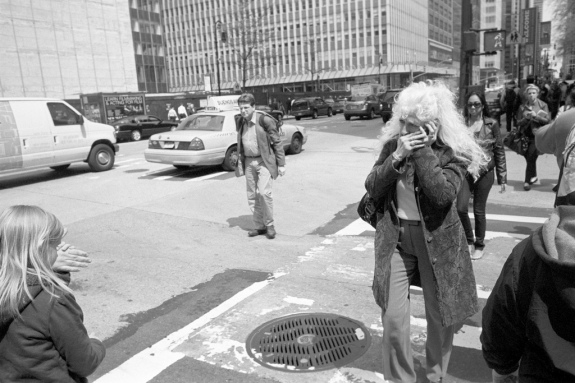 Here’s another one that jumped out at me: “I took photos of people! Good for me!” She was an interesting looking woman in person, but here the frame is too cluttered to even start to look at her with any interest. The cut off shoulder on the right is a problem, as is the little girl in the lower-left corner of the frame. I kind of like the guy in the middle. Fast shutter speeds always make walkers look odd. I should have tipped down a bit, too–the central figure’s head is too close to the center. I could have gotten her whole figure in the frame had I done that. It’s something I struggle with–my perception of the frame is distorted when I look through the viewfinder. If she were really interesting, I might have tried to take more photos of her, with an ever-changing context around her, hoping that something would click. 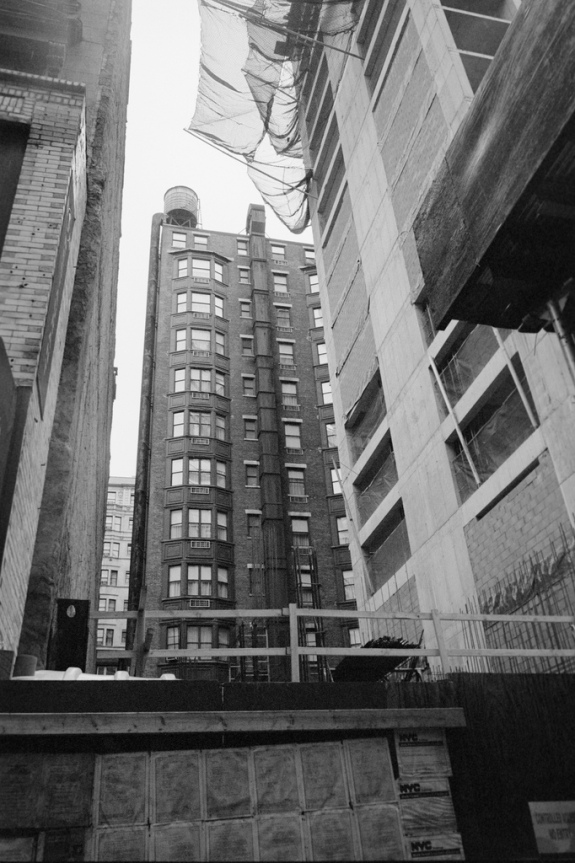 Here’s another documentation photo meant more for me than anyone else. I consider it less of a photograph and more of a note. The empty lot in the foreground used to have a building on it, and they’re putting a new one up now, most likely another narrow hotel, the likes of which have been sprouting like weeds in the Garment District these past several years. The back of the building in the center fascinates me. This seems like an unusual amount of detail and attention to a wall that probably faced a nearly identical building back wall. We don’t have many alleys in NYC, just narrow passages between buildings. So the idea of bay windows on the back of a building was interesting to me. Why not?

I like the expression on this kid’s face. I love the stripes on his cap and how they continue the “stripes” on the building in the left side of the frame. I do not like head and shoulder in the lower-right corner. I do not like the slight blur. It doesn’t bother me that I didn’t get this right, because just looking at it taught me a few things that will hopefully help me improve: notice the visual interaction between people and objects (here, the stripes); 2) wait for the right moment–I was too taken with this young man’s entry into the frame that I probably didn’t notice the blob passing me on the right and ruining the shot; 3) if I don’t have the light and aperture to shoot this at at least 1/250 if I’m moving, or 1/125 if I’m not, don’t bother. I don’t hold the camera to my face when I shoot. I bring it up quickly, shoot, and put it back down quickly. I probably shot this at 1/125 while walking.

I have some more photos from the same roll to talk about tomorrow.