I’ve learned a lot in the last decade of my (almost) daily photography practice, and I have to constantly remind myself to use what I’ve learned until it becomes habit. In no particular order, I’d like to share some of these habits—please share yours in the comments.

Keeping a film journal is really easy (or as complicated as you’d like to make it). The three main reasons I keep one are to remember the technical details of how I shot the film, especially film speed; what I shot—event, location, etc.; and when I shot it. I start an entry when I start a roll of film.

My film journal is a small Moleskine with ruled pages, but anything will do. I like the Moleskines because they’re a lot tougher than most notebooks. On each page I have room for two entries (rolls). I do it like this:
2013-0001 [index number for roll] 2013-01-01 [date]
Tri-X [film] @1600 [exposure index/film speed]
M4 S35 [camera and lens used, Leica M4 and 35mm Summicron in this case]
Location, people, other stuff that might help me identify developed film
HC-110B 26min 30sec 5x/5min 7.5ml/240ml steel tank [development notes, added later]

When I’m ready to develop film, I gather rolls that I’m going to use with the same developer using my notes, and when I cut and archive the films, I use the same index number on my PrintFile sleeve.

This is the most difficult thing for me to do, it seems, and for no good reason at all. I literally never leave home without a Sharpie for this very purpose. When I’m done shooting a roll, I look in my film journal to see what the index number is, then write it on the canister with a Sharpie. When I’m using re-usable cassettes, I use a bit of spike tape (thin gaffer tape, very handy) and write on that with the Sharpie. Then as I load the next roll, I start a new journal entry.

Why this is important: I just shot two rolls of Tri-X at a birthday party. I labeled one, and the other languished in a pocket or bag, unmarked. I shot them both at 3200. In the last few months, I’ve usually been shooting Tri-X at 1600 for development in either Rodinal or HC-110. So I assumed that’s what the unmarked roll was and developed it that way. So now I have 36 well-exposed frames of grainy birthday fun and 36 underexposed, ugly-ish frames of grainy birthday fun. Not the end of the world, but totally avoidable. 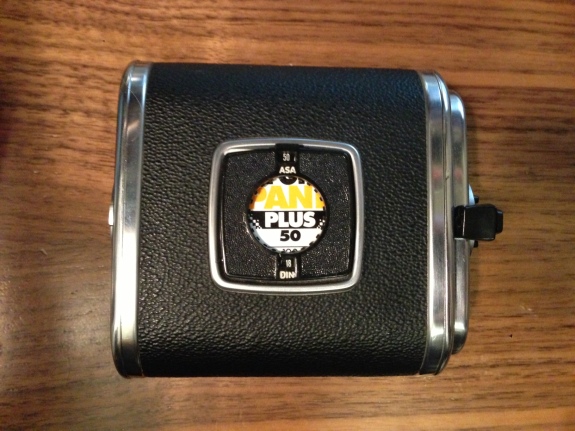 3) Keep track of what’s in your camera

I use my film journal for this, but do this on the camera, too. If my camera has a box tab holder (that little sleeve on the back of some SLRs), I use it. There is a film speed indicator on the back of old Hasselblad magazines, and it flips up to accomodate the film box tab. I use it. There is always a chance I will not complete a roll before I set a camera aside, and I would love to know what was in it when I pick it up weeks later. This is especially important with large format film. I become enraged with myself when I have unexposed 4×5 holders with no indication whatsoever of what film’s in them.

4) Measure your chemicals into individual pitchers

I’m a lazy developer, and when I’m using Diafine, for example, I just pour chemicals straight from bottles into my developing tank. If you’ve used Diafine, you know how lazy you can get using it, if you let yourself. I recently bought the contents of a student darkroom, and with them came a set of plastic pitchers. I scoffed at first—who needs these? But I quickly realized that using the pitchers would eliminate most, if not all, of my mistakes when developing film. Now I measure out the chemicals before I begin. When I’m done with each chemical, I pour it back into the pitcher. This makes my workflow much faster, as I can re-bottle the chemicals when I’m between tasks rather than right after each step. It also prevents me from pouring chemicals down the drain absent-mindedly, because I now automatically pour whatever chemical is in the tank back into the empty pitcher in the sink. It’s simple and it works.

When I resumed developing film, I learned that you don’t need to use stop bath because a water rinse is sufficient (in most cases) to stop development. I also develop a lot in Diafine, and stop bath is not recommended when using that developer. But stop bath does a couple of magical things: it saves water, and it saves fixer. Near the end of development, if I’m using a water wash, I have to run the water for a minute or so to stabilize it at 68F (or whatever temperature). If I use stop bath, I don’t have to do that. And your fixer lasts much longer, which is great, because disposing of spent fixer is a pain.

6) Test your fixer every time you develop film

This is so easy, and if it saves you even one re-fix a year, it’s worth the time. At the beginning of your developing session, after you’ve loaded the film, take the bits of film you cut off when you loaded your film onto reels (for 35mm film) and put them in a graduated cylinder. Set a timer to count up. Pour enough fixer in the cylinder to cover the film. Hit “start” on the timer. Shake or swirl the cylinder. Go work on setting up the rest of your developing process (measuring developer, etc.). At one minute on the timer, check your film. If it’s clear, your fix time is two minutes. If it’s not clear, check it every 30 seconds to see if it’s cleared. The basic rule is to fix for twice the length of time it takes to clear. You can do what I used to do and just increase the fix time slowly over time, but testing is obviously more accurate, and it accounts for the idiosyncrasies of different films, whether or not you used stop bath, etc.

7) Keep a small flathead screwdriver with your Hasselbad

Don’t leave home without it. If you own a classic Hasselblad, you know what this is for. More than once I’ve lost hours of shooting because I couldn’t unjam my Hassy and I hadn’t brought a backup.

The state of the film world is shaky at best. Lines of film continue to be discontinued regularly, and photo labs continue to shut down even after massive consolidation. If only the big labs survive, the quality of work will go down. I bring only color film to labs, and the one lab I trusted (the only one that hasn’t screwed up a job) just shut down on Friday. If you can afford it and you believe in film photography, know that you’re not alone, and together we might be able to make it commercially feasible for at least one more film and one more lab to stay in business this coming year.