Primo Jr. and experimenting with 127 format 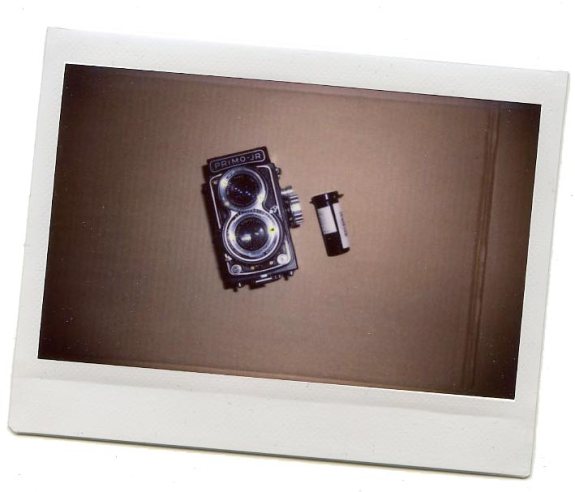 A friend recently messaged me on Facebook and asked if I’d like an old camera that was her father’s. I said yes, and she promptly sent me three cameras altogether: a Primo Jr., a Canon AE-1, and a Pentax K1000. All of them seem to work. Thank you, Jennifer!

The Primo Jr. was a short-lived (1958-1960) twin lens reflex (TLR) camera from Japan. The same company is also known as Topcon, a more familiar name in the camera world. The camera shoots in the 4cm x 4cm format, also known as 4×4, and accordingly uses 127 size film. No one really makes this film in large quantities anymore, but apparently a Japanese company cuts and rolls it. If you check around, you can see that someone’s cutting and rolling 160 and 400 speed color negative film that’s made in USA <cough> Portra <cough>, but in anticipation, I ordered two rolls of ReraPan 100, the Japanese brand.

What a delightful little camera! The quality is instantly noticeable from the weight of the camera in the hands to the placement and feel of the controls. Some bits of leatherette are missing on the face, but it’s hardly noticeable. Junior’s a handsome fellow.

At my first opportunity, I loaded the camera with film and went on a shooting excursion with my little boy. The Williamsburgh Savings Bank clock tower was looking mighty fine that morning, with dramatic clouds behind it. My son said “you should take that picture.” Indeed. I checked my light meter, set the aperture and shutter, and depressed the shutter button. Nothing. I wound the camera. It kept winding until the tension let free and I realized I had just wound up a $12 roll of film without taking a shot.

See those two silver bits above the crank? Yeah, you’re going to want to read the manual. After loading the film and winding it to “1,” and making sure the red window is shut (it has a sliding door to block light), you press down on the left button and simultaneously slide the right button over it (to the left). That resets the film counter and sets the shutter.

Fast forward a few days and a donation to Butkus and I was back outside, again with my son, trying out my new toy.

This lens is sharp! Look at the details of the century of paint on this railing detail at the entrance to Fort Greene Park. The out-of-focus areas are rendered more pleasantly that I expected, given that the Seikosha-MXL shutter has only five aperture blades. Shooting against a point light source might work out differently.

I actually only got half the frames I expected out of this roll. I don’t know if the shutter malfunctioned, or if I screwed up. I learned later that you shouldn’t cock the shutter then choose the 1/500 shutter speed, which I’m pretty sure I did in order to shoot with a wider aperture at times. It was also below freezing out, so old lubrication might have been at fault.

The film? I like it fine, but I haven’t had enough experience with it yet. With such a small sample, I can’t tell if there was too much contrast in some of the scenes I shot. I was a little disappointed with my exposures. I was using a hand-held incident meter.

My next trick will be to roll the unused film onto the used spool and paper backing. Should be fun. I’m sure I won’t curse at all. As much as I’d love to just buy a few more rolls and get on with my life, twelve dollars is twelve dollars.

I developed the ReraPan in Adox APH09 (older formulation of Rodinal) for 16.5 minutes at 68F/20C. I soaked it for a minute first then flushed. I agitated for 30 seconds at the beginning, then two gentle inversions every minute thereafter. Water stop, then TF-5 Fixer for 3 minutes (if you haven’t tried it you must). Rinse and wetting agent (LFN).

Here are a couple more shots of the camera and film (all shot with my phone). You can see the exposed gold-toned screws where the leatherette is missing.

And another shot of the eagle. Have to get my money’s worth out of the shots that came out! 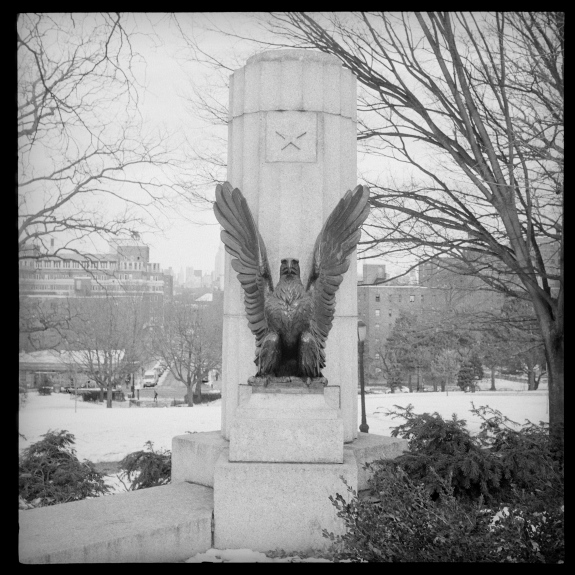