DX Hacking for a Point-and-Shoot

If you have a camera that can detect the film speed from the DX code on the film cartridge, you can fool it into thinking that the film is another speed. This is useful if you intend to push or pull the film in processing.

Tri-X is my 35mm black and white film of choice. I actually shoot Arista Premium 400 almost exclusively now because it’s the same film and it’s a lot less expensive. It’s an extremely versatile black and white negative film: I’ve seen people get acceptable results (for their purposes) at an exposure index from 100 to over 12,800. It works with tons of developers. It’s a good match with Diafine, my everyday developer. But I’m also enjoying developing it with Rodinal, or, as it’s now marketed, Adonal. Check the Massive Film Development Chart: Rodinal 1+50 = any ISO from 100 to 12,800.

I have a love-hate relationship with point-and-shoot cameras, but this Yashica T4 just fell back in my lap, so I thought I’d try shooting with it again.

So if I like to shoot Tri-X well above 400, and I’d like to use the Yashica T4 more often, what do I do? I hack the cartridge. It’s pretty easy, actually. I spent some time online looking for stickers to do the work for me (I bulk load a lot of my own film), but for factory-rolled film, the edge of a knife works best.

Here are the relevant DX codes for ISO on a film cartridge. If you wish to see them all (and what the other codes are for), read the Wikipedia article “DX Encoding.”

If you’re looking at a film cartridge, this is the top row if you have the film spool stem to your left. Black spaces are black paint, white spaces are silver/bare metal/conductive surface to make contact with the sensors in the film chamber of the camera.

The reason I’m keeping this simple for this post and for my own tests is that all of the speeds above 400 in the above chart are attainable by scraping black paint away. No need to add black paint (or electrical tape) anywhere.

Just score the area you’re going to scrape so you don’t scrape “outside the lines,” then using the edge of a knife, scrape away the paint until you’re left with bare metal. 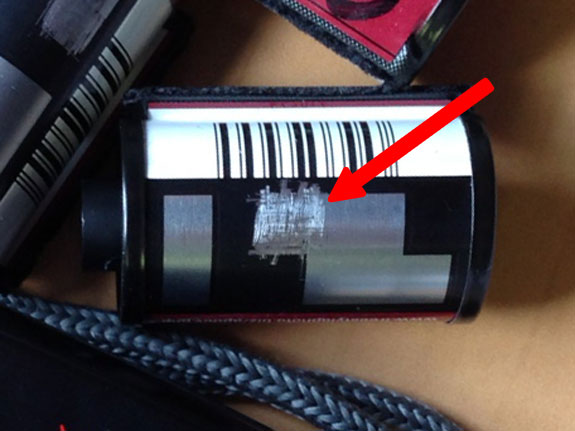 Wipe off the dust (you don’t want that in your camera or on your film). Now write on the cartridge with the “new” EI is so you don’t forget, and you’re good to go.

Soon I’ll post with some results of hacked Arista Premium 400/Tri-X cartridges and the Yashica T4. I’ve taken photos two consecutive days with similar weather, and some of the same scenes.

If you’re hacking DX codes with success, let me know!

For some reason, when I originally wrote this post, I left out the ISO code for 1250, which is the speed I would shoot Arista Premium 400 and shoot Kodak Tri-X at for development in Diafine. I’ve updated the chart above. I wasn’t trying to keep it a secret, I promise! I was just too lazy to update the blog post until now.